Home of the Finest Details

An Interview with Ahmed Darwish

Innovation can take on so many definitions. It can revolve around finding solutions, tackling novel ideas, or just an original way of perceiving life. It can also be a very concrete technological advancement or an intangible concept. There is no right or wrong when it comes to innovation, just different points of view.

HE Magazine had the chance to discuss the topic of Innovation, among many other topics with Architect & Designer Ahmed Darwish, founder of Ahmed Darwish Design House that has three branches— including Cairo, Alexandria, and Behera, covering projects all over Egypt, UAE, Bahrein, and Saudi Arabia. They are opening their new office in Dubai in April 2022, making it the only Egyptian design house with 3 branches in Egypt and one in the UAE.

Darwish grew up surrounded by construction and civil talks at home, and his father took him on trips to sites since he was a kid. His eyes were used to seeing buildings constructed in their different forms and shapes, as his father was a civil engineer. Although his father was not specialized in architecture, still, Darwish’s walks around construction sites from a young age ignited a glimpse of passion deep inside that paved its path towards architecture later.

Later, he attended the Faculty of Engineering, and as the traditions rule, he was expected to follow his father’s footsteps and specialize in civil engineering, but Darwish had a different opinion.

“I was passionate about décor and design more, so I surprised my father with my decision, and indeed, I passed the test and went for architecture after a lot of debates with him, and started to find my way from there,” Darwish said.

Darwish started working in design when he was in his 2nd year of university as his father had connections in the field that encouraged him to start his career earlier than his colleagues, designing and executing projects at such a young age. But without his dedication, hard work, thrive for learning, and talent, he wouldn’t have made such remarkable achievements.

“Today, I have been 16 years in the field. The start was really early, but it prepared me well and made me advance faster in my career.”

Darwish started his work as a solo architect; “I spent about 4-5 years designing, supervising, inspecting, paying employees’ salaries, and much more all by myself. I used to only sleep 4 hours daily, as my mornings were always spent in sites, and my evenings were spent on my work and designs… I was stuck in this routine for 4 years!” he declared.

Today marks 10 years of Ahmed Darwish Design House. “I started my Design House in 2012; this was when I decided to have my own company, and step by step, I’ve started expanding into branches. And today, I can proudly say that my company is the only company in Egypt with 3 branches, in Alexandria, Behera and Cairo.” 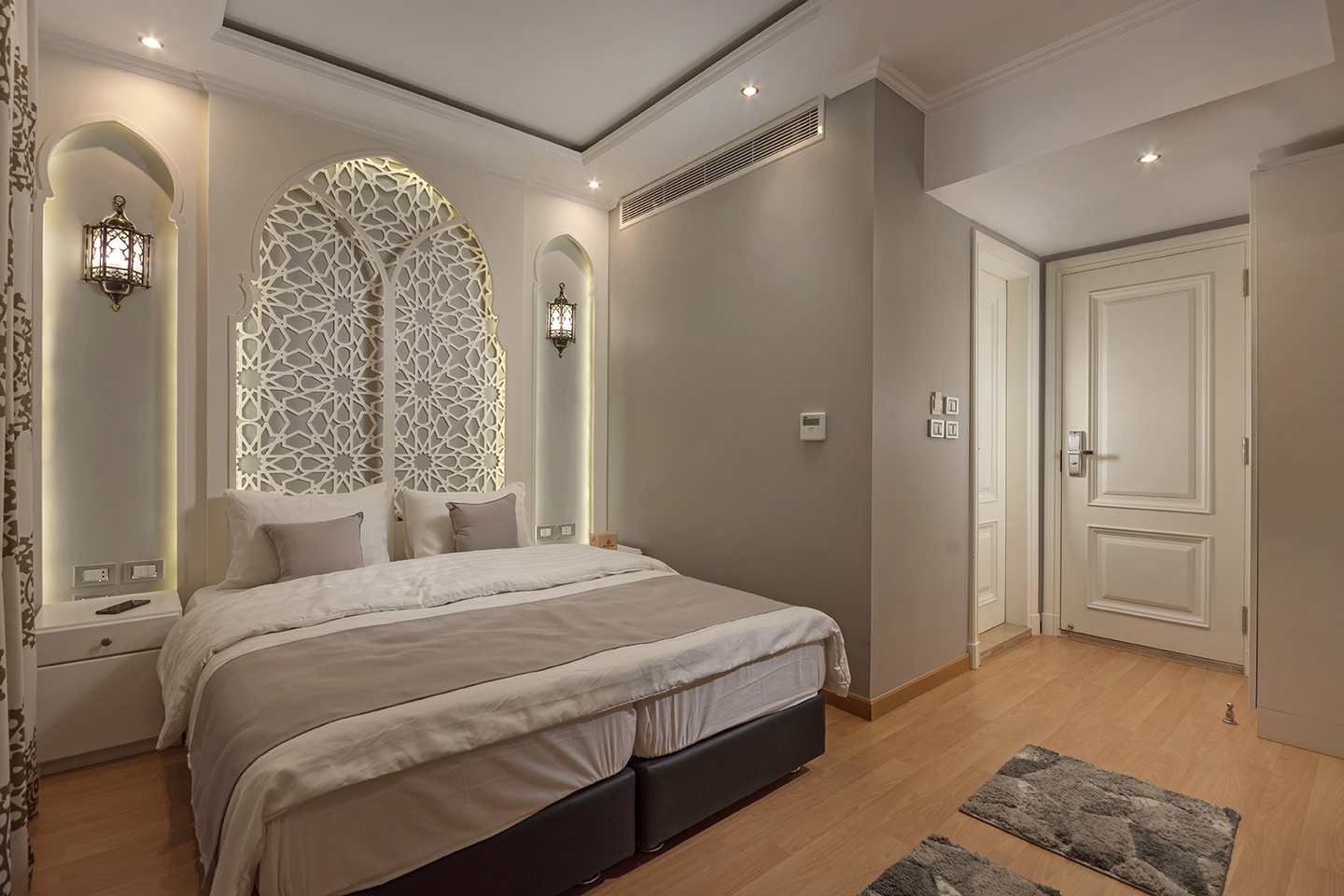 Any person on earth, in any field, gets highly affected by the circumstances and challenges they face in their life, on a personal and a professional level.

Darwish spoke with us about 3 main turning points that were key transitional phases in his life and career.

“First of all, of course, the passing of my father was a huge turning point. My father was the most influential person in my life, and after we lost him, I found myself having the full responsibility of my life and my family, so this made my determination to succeed even stronger.”

Darwish has also mentioned the deadly car accident that he survived, after which, his mindset and priorities changed. “I have spent 3 months in bed, and 3 weeks in the ICU. After I woke up, I recalculated everything. I gave my team space for more freedom, changing the ‘one-man show’ methodology I’ve been following before. I mean, I left everything behind for 6 entire months, and when I came back, all the work was handled and everything was working fine. So, I learned that trust is more important than the ‘one-man show’, and putting a system is one of the most crucial things that should never be neglected.”

On a more positive note, one of the projects that had actually given Darwish great exposure in his career and was a key transitional point is Miramar Boutique Hotel in Alexandria.

“This project was a different experience. I liked the exposure it gave me. It was a different idea…and rare. Every room has its own style and identity, reflecting a certain city. This was one of the projects that boomed in Egypt in general.” 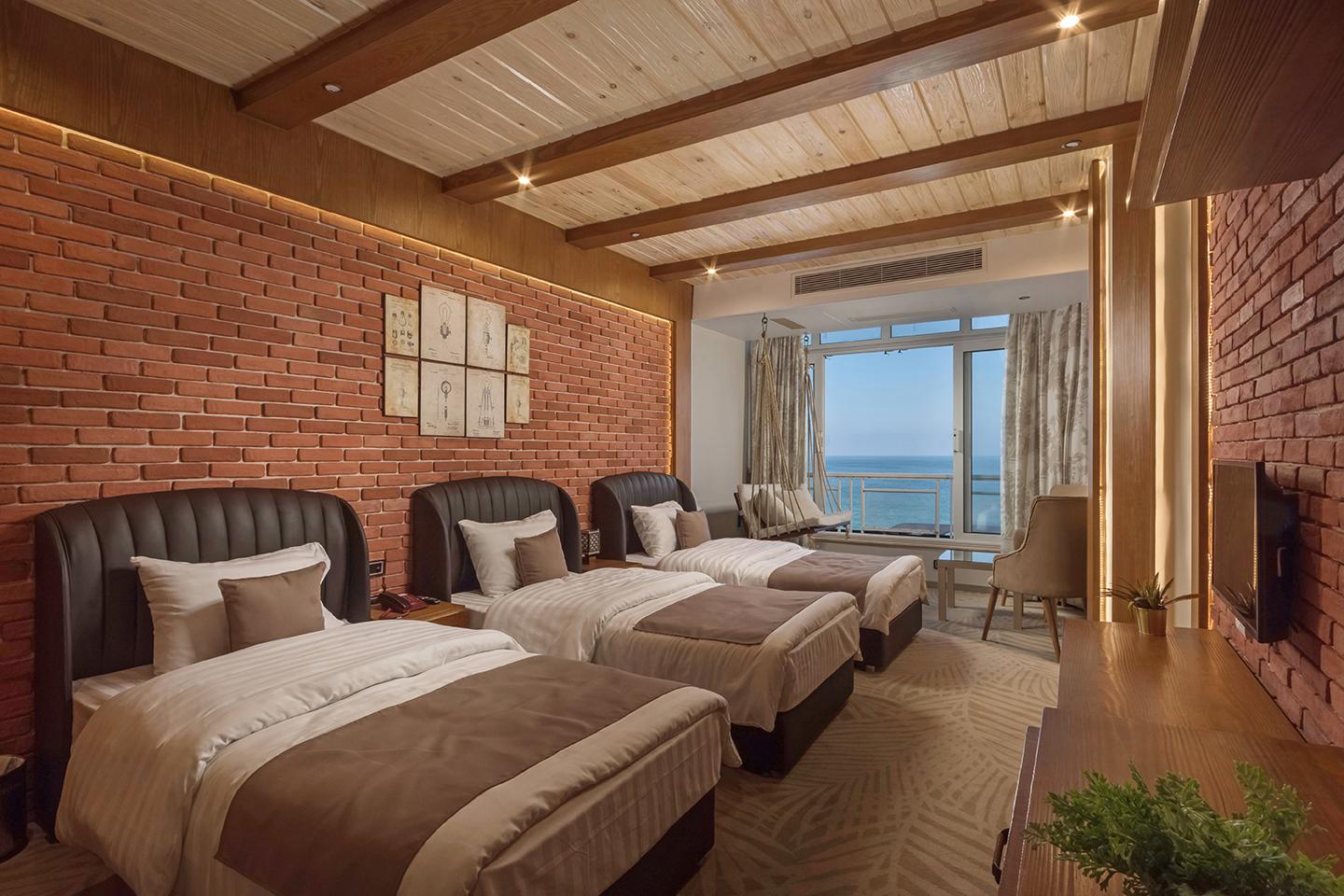 Two main projects had significant challenges in Darwish’s opinion. One; BSL Group, a well-known company in the field of maritime transport and shipping. The company’s headquarters is in Fouad Street, Alexandria; in a building in El Sultan Hussein district.

“The challenge is that the building was old, and they needed to merge 3 separate apartments together to make up the company, within a timeline of 3 months,” Darwish explained.

They have actually managed to do it, succeeding to meet the deadline, meeting all the criteria needed, and overcoming all the challenges.

The other challenge was Miramar Boutique Hotel because it was built in a residential building. “To be able to make a bathroom for every room and to make the drainage and plumbing work was not an easy task. We have worked on a lot of solutions to be able to make it happen, in addition to other solutions for air purification and extractor fans.” 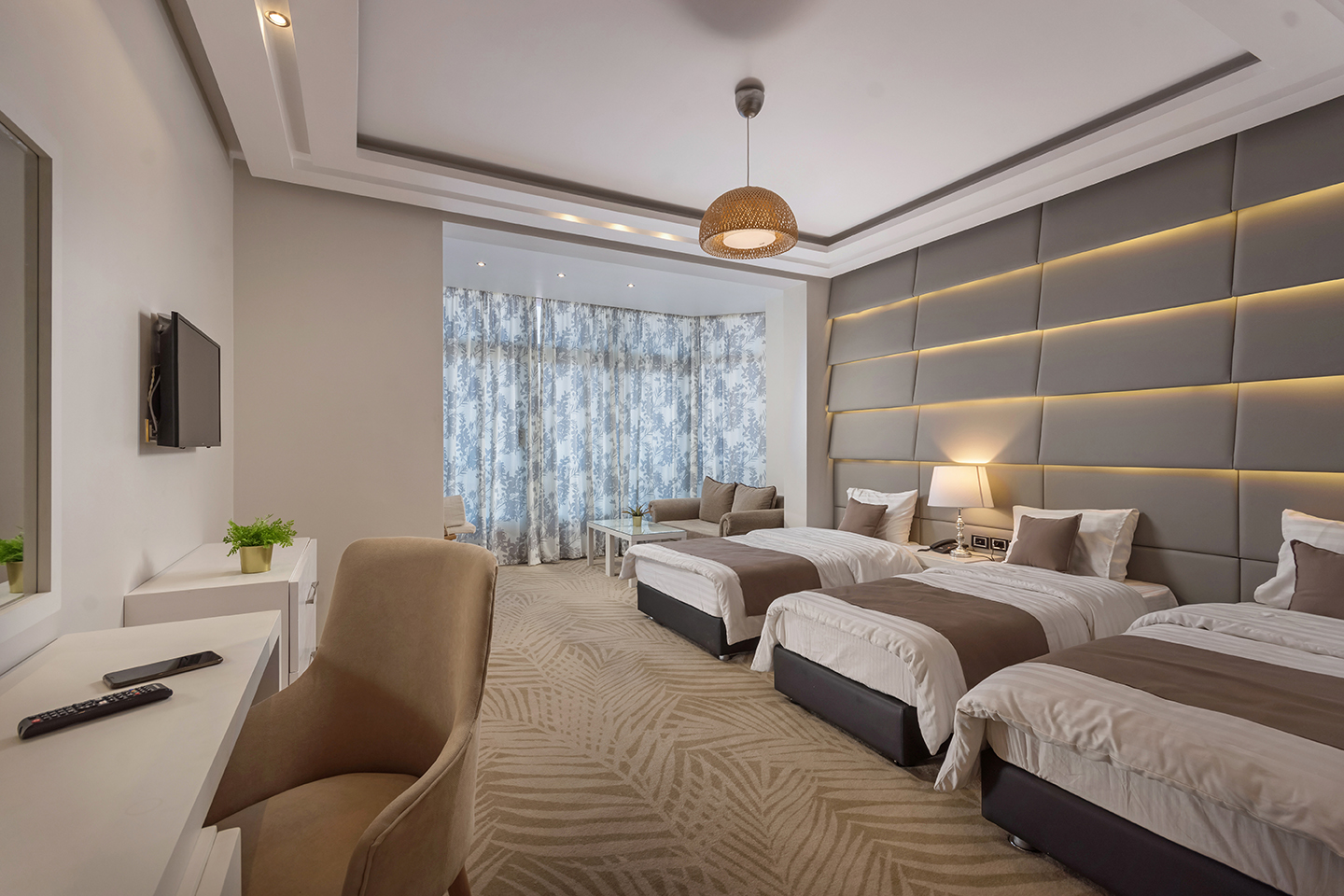 Technology is a double-edged sword

Darwish believes that technology has its benefits, but also, just like anything else, if it’s misused, its cons start to evolve.

“Computerized and 3D programs helped a lot in conveying what we’d like to do exactly to the client. So, this is a great addition. With a 3D design, the client can see everything that would take place in his house from A-Z before the execution, which saves a lot of time,” Darwish explained.

“Many designers are now doing the same things, following the same pattern. A lot of designers are copying one another without thinking. The internet has given room to lots of options from every corner of the world, leaving less space for innovation and creativity— as people choose to go with the available options,” he continued. 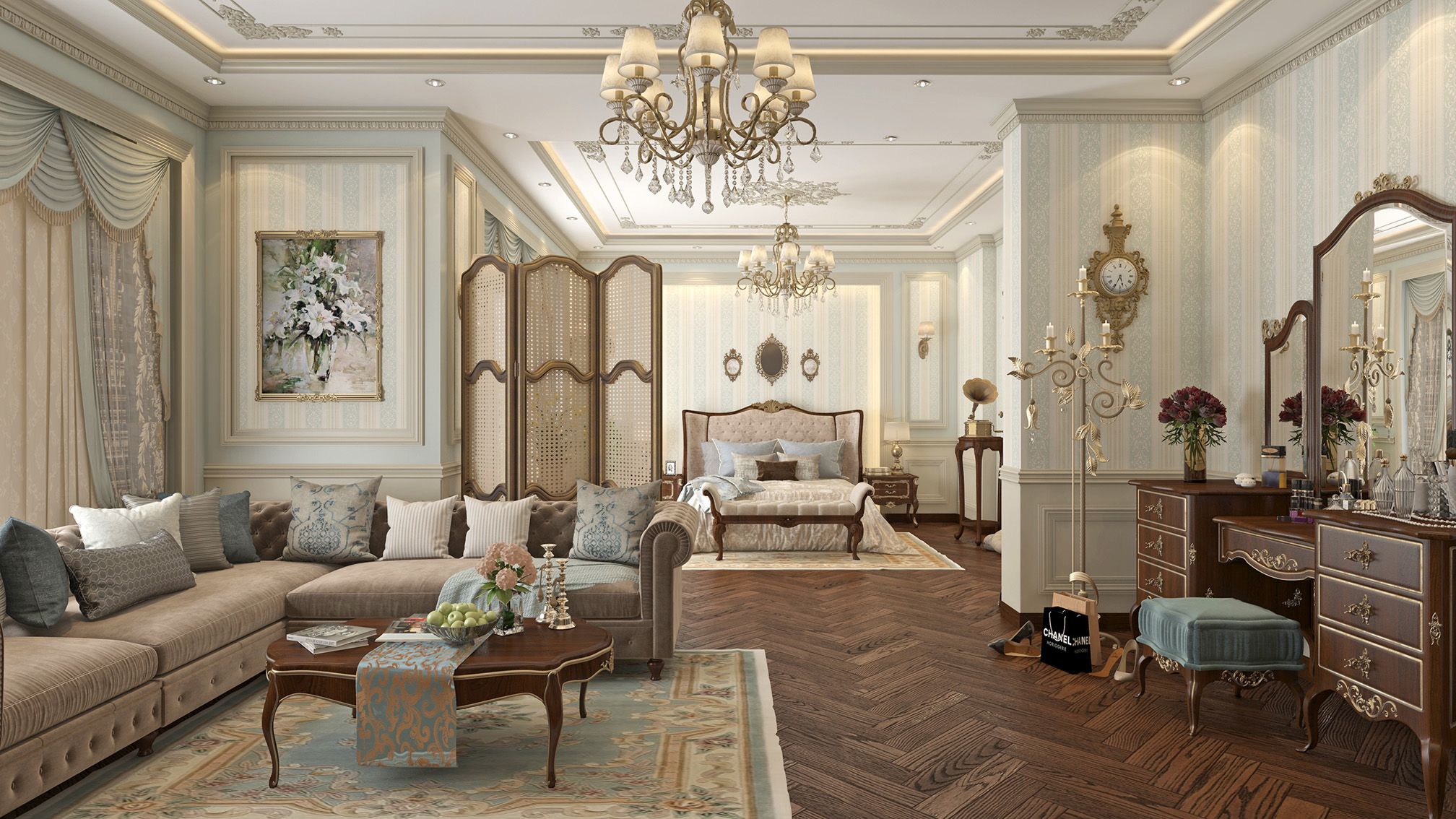 A client’s house in Alexandria

Darwish spoke to us about a single-storey apartment with a garden in Sodic, Smouha, that he turned into a cave house. The concrete ceiling that was initially there was turned entirely into wood. You cannot see any sign of the concrete, so it looks like a cave house, like an old British house. Branches of fig trees were cut to be used on walls, in addition to the remainder of some containers’ wood. Darwish managed to master this vintage style, with a ceiling of 2.7 meters, which was a challenge.

“The house is warm, cozy, and different, unlike anything you’d see.” 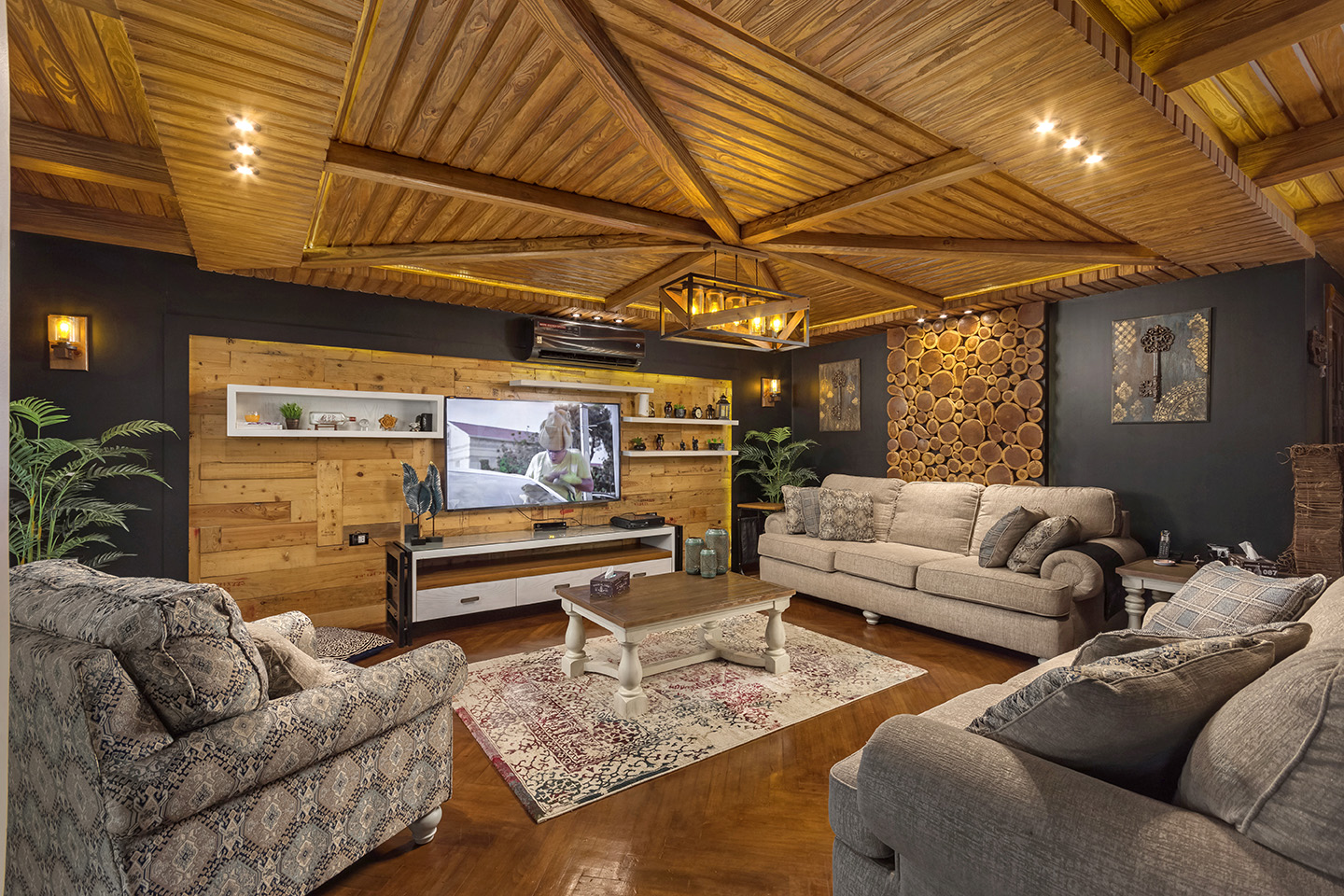 Darwish didn’t want to stick to the traditional culture of common mosques’ designs. So, he designed this mosque with Islamic elements, but in a more modernized style.

“This is one of the projects that are close to my heart, and it is more peaceful and tranquil than the old motifs we’re used to.” 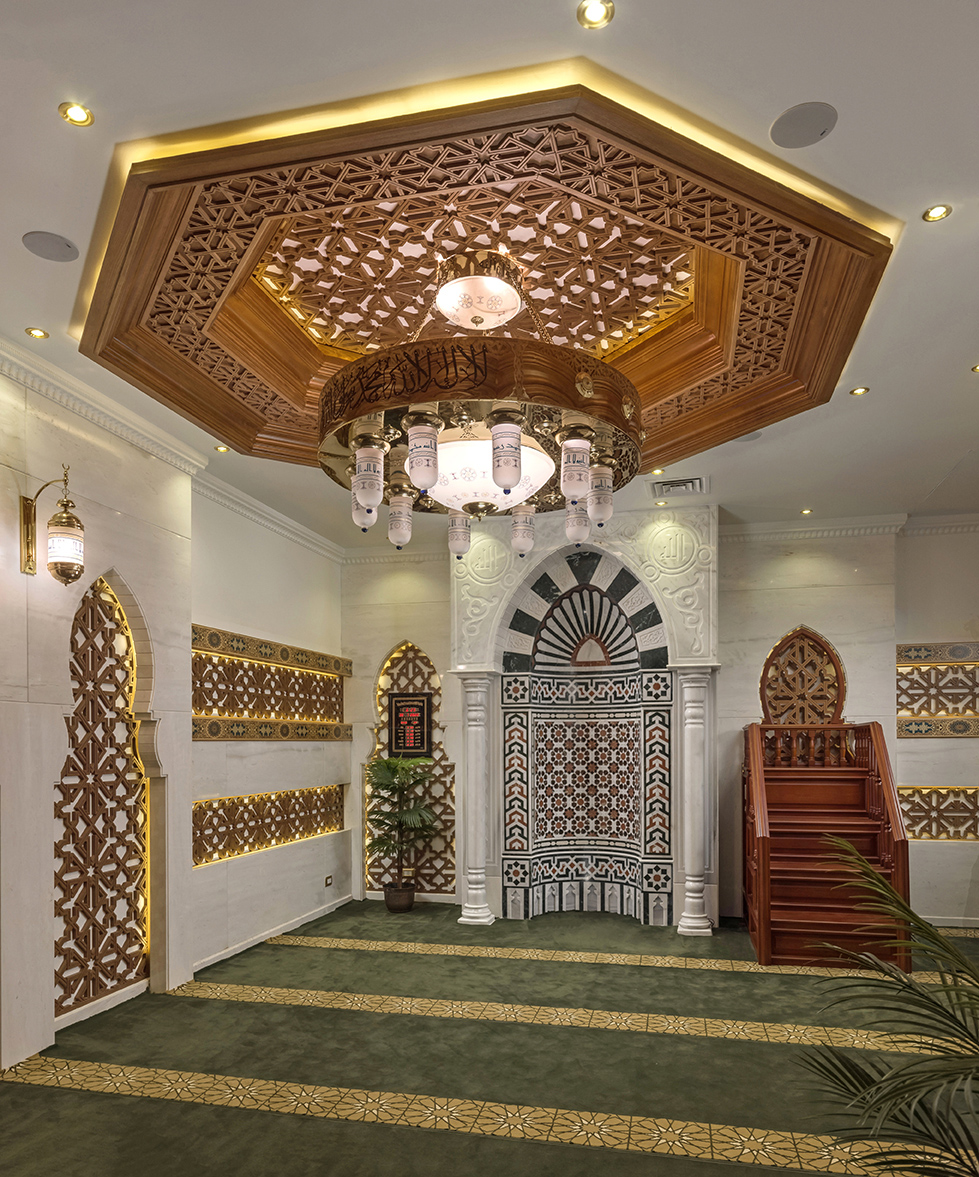 A modern house for a client

In 2013, just one year after establishing his company, Darwish worked on a house using unique materials that were not previously used in Egypt. The use of black acrylic on walls and onyx marble on the floor was new to the eye. And what made a fuss is the fact that it was the first home in Egypt to be finished with an automated system of such quality.

“The automated system still works till today without any problem. It was a new experience, and to be the first to execute a new concept before anyone in the market gave me a huge boost and exposure,” Darwish said. 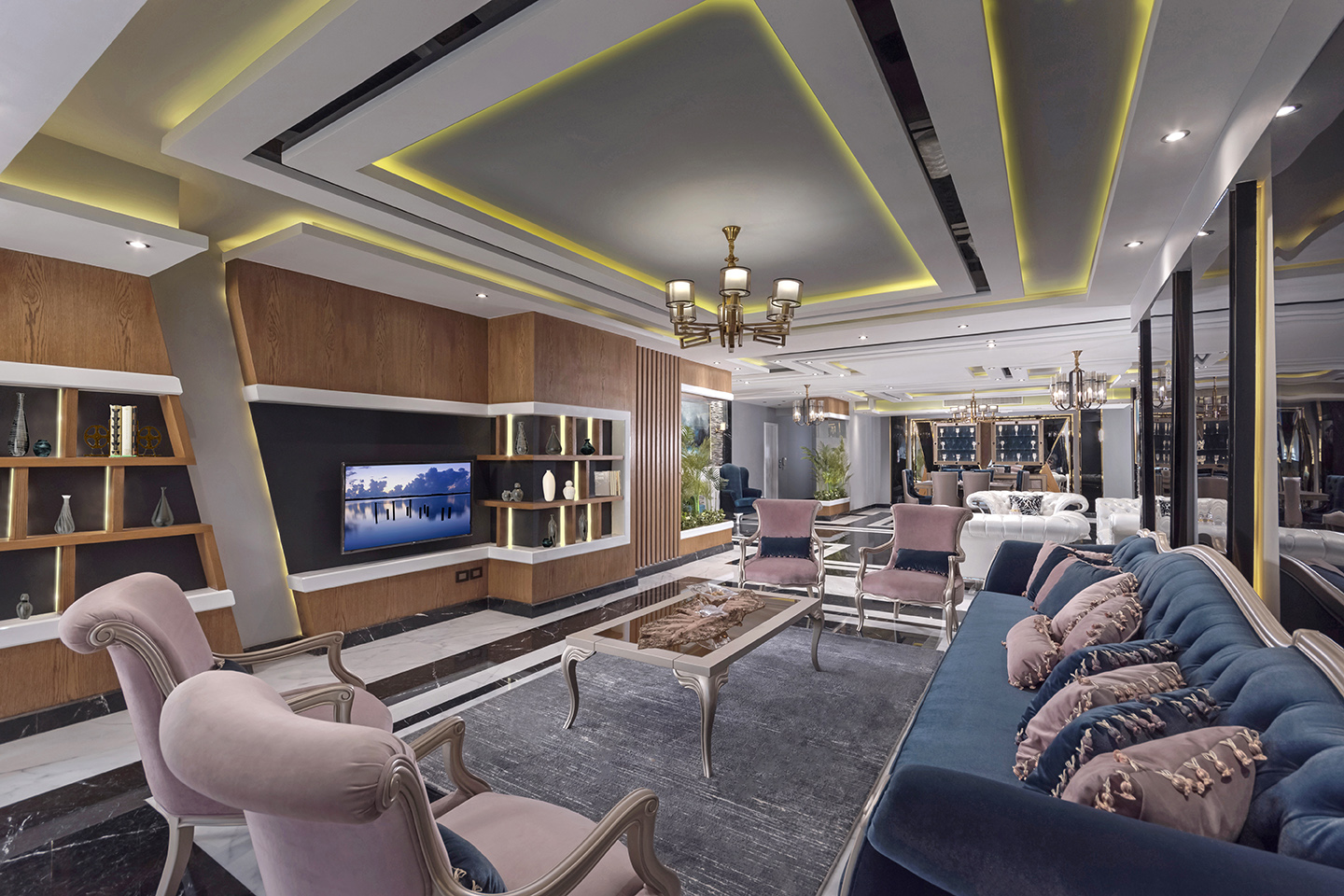 An Advice for the Young Generation

“Do not jump steps. Take time to learn, explore, and work on yourself first before working on real ground. How would you work without the experience needed and the skills acquired along the way? The first go-to savior is getting inspiration from the work of famous designers. Subconsciously, you’ll start copying their style. Every designer has a spirit or soul that you can see in their projects. Impatience can prohibit you from finding your own spirit and having your own character as a designer. So, take the time to learn and discover… then build your own design house.

“The second advice I’d give is to not follow anyone’s footsteps. Be more creative and find a new idea to offer our generation; a new concept that no one has done before. Find your own way…”