Even at 6am on a yacht in the middle of the Nile River, Dhafer L’Abidine still looked as charming as ever with his million-dollar smile as we prepared for the photoshoot before heading to the Sheraton Cairo Hotel for our interview.

As Ramadan approaches, fans begin to reminisce about all their favorite 2017 Ramadan series including the popular Halawet el Doniafeaturing the charismatic L’Abidine. Women everywhere can get excited because the wait is almost over: L’Abidine will be returning this Ramadan in Layali Ogeinyfeaturing Amina Khalil and airing on CBC. L’Abidine has had an interesting life, to say the least, starting his career as a professional soccer player for Tunisia and becoming one of the most esteemed Arab actors on the scene. Let’s dive into where it all began.

Born and raised in a family of seven with two sisters and two brothers, L'Abidinehad a normal childhood growing up in Tunisia.

“I have a lot of good memories growing up in Tunisia; our family was very close. I spent a lot of time with my brothers and sisters and of course my father and mother,” L’Abidine said.

L’Abidine played a lot of sports growing up including track and field, swimming, volleyball, and judo, but he eventually fell in love with soccer. L’Abidine attended middle school and high school in Tunisia where he played for the Tunisian National Football League. He also took some computer studies classes while playing professional soccer. At that time, L’Abidine was not thinking about anything else but playing soccer on a national level for Tunisia. He even traveled and trained for a while in France before a national soccer tournament. His first dream was to become a professional soccer player. He eventually had to retire from professional soccer after playing for 13 years due to injuries and some personal circumstances. Feeling lost like the senior in college who has no idea what he is going to do in a few months, L’Abidine felt unsure of what he was going to do next.

Growing up, he watched a lot of movies with his brother during his free time after school because his brother had a video club in his room. That was the first time the thought of an acting career crossed his mind. When L’Abidine ended his soccer career, he was not even thinking about a professional acting career. He always liked acting, but he never thought he would one day be where he is now. He always believed he was a good soccer player but never thought he would be a good actor. He shoved the thought of an acting career aside and instead started to do some modeling work in Tunisia. He eventually went to France and competed in some modeling events there. He even signed a professional modeling contract, but he still felt like that was not his calling and that something was missing. He eventually decided to quit modeling and head back to Tunisia, and that was when it clicked and he knew exactly what he wanted to do.

He decided to give this acting thing a try; he worked on a commercial with a Tunisian director.

“I told him I wanted to be an actor, and then he told me to come work with him as an assistant so that I could understand the job from an outsider’s point of view and learn from some of the actors. I did that for a year and a half,” he said.

He then started participating in small roles, including a role in an Italian movie that was filmed in Tunisia. That was when he realized how much he loved acting and didn’t want to do anything else. L’Abidine moved to the United Kingdom to learn to speak different languages, such as English and Italian, because a lot of international movies are shot in Tunisia, so it was important to be able to speak a lot of different languages. His acting career took off even before he went to acting school. Before he graduated from the Birmingham School of Acting in the United Kingdom, he was cast in 64 episodes on the British TV series Dream Team, which aired on Sky TV. He spent two years being a full-time actor on the show for two seasons.

“I enjoyed the show because it talked about soccer, so that was a full circle experience for me because it had two things that I really enjoyed doing,” L’Abidine said. 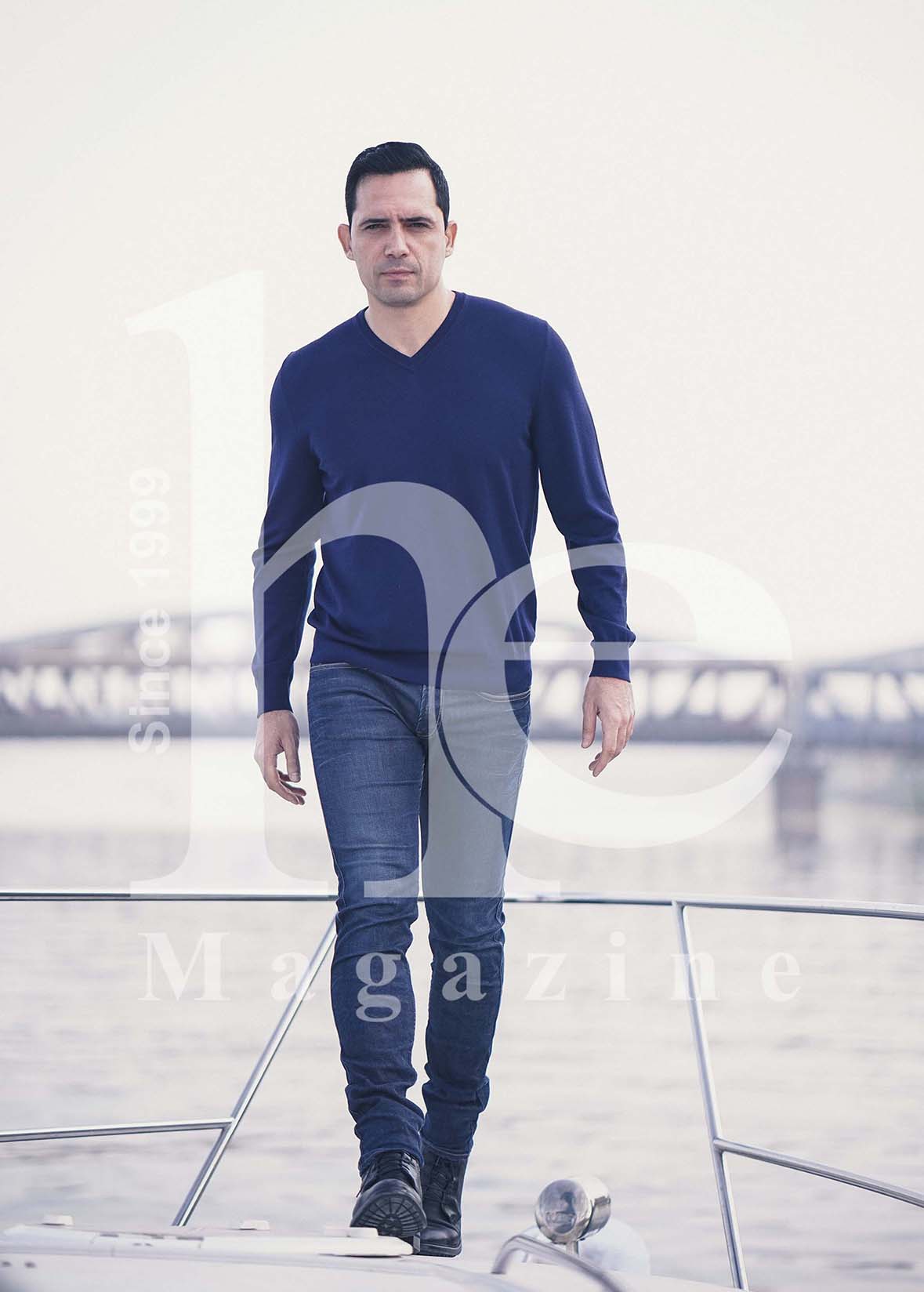 He went on to star in all different types of movies and TV series all over the world including France, the United States, Tunisia, England, Lebanon, and Egypt.

L’Abidine said growing up watching Egyptian cinema has helped him tremendously as an actor.

“Egyptian cinema is the center of the Arab acting world. Egyptian culture and tradition are understood and valued in the Arab world and it’s a tradition for Tunisians to watch Egyptian movies and series all the time,” he said.

L’Abidine said he always hopes his roles aren’t just for entertainment but also hopes they send meaningful messages and life lessons to his fans.

“The series Halawet el Doniawas centered around cancer and drug addiction, so it was also educational for the fans because it talked about two of the biggest health issues that we are dealing with today and how you could potentially overcome both issues. It was educational,” he said. He said actors won’t always get the opportunity for these roles but should try to balance between purely entertainment roles and educational roles.

“I’m always interested in roles that will benefit society but it is impossible as an actor to just have one specific role every single time. You’re going to have a mixture of light, entertaining, and hopefully educational roles as well. It’s inevitable,” he said. L’Abidine is one of those actors that is always looking for ways to become better at what he does.

He said to grow as an actor you should always try to get cast in different roles with different genres.

“I would like to do different roles in different genres. I would like maybe a role in a historical movie or an action movie. But unfortunately, your roles as an actor are always connected to what is available. But overall my goal is to have a different role than my previous one,” he said.

Something that truly baffled me, and something I made sure to ask L’Abidine about it, was why the Arab world has many phenomenal actors and actresses, yet Arab cinema does not make much money and does not win many awards like other nation’s films.

He shared his thoughts on this saying, “A lot of it has to do with the scenario and script of the movie or series. A lot of Arab cinema and series only attracts local people. It will only be understood by local people. There is also a difference in technique between writing Arabic scripts and English scripts. We also don’t have the resources to make a successful long movie with a lot of detail such as the popular American movie Avatar. Fortunately, an Arab movie is usually nominated for an Oscar every year.” 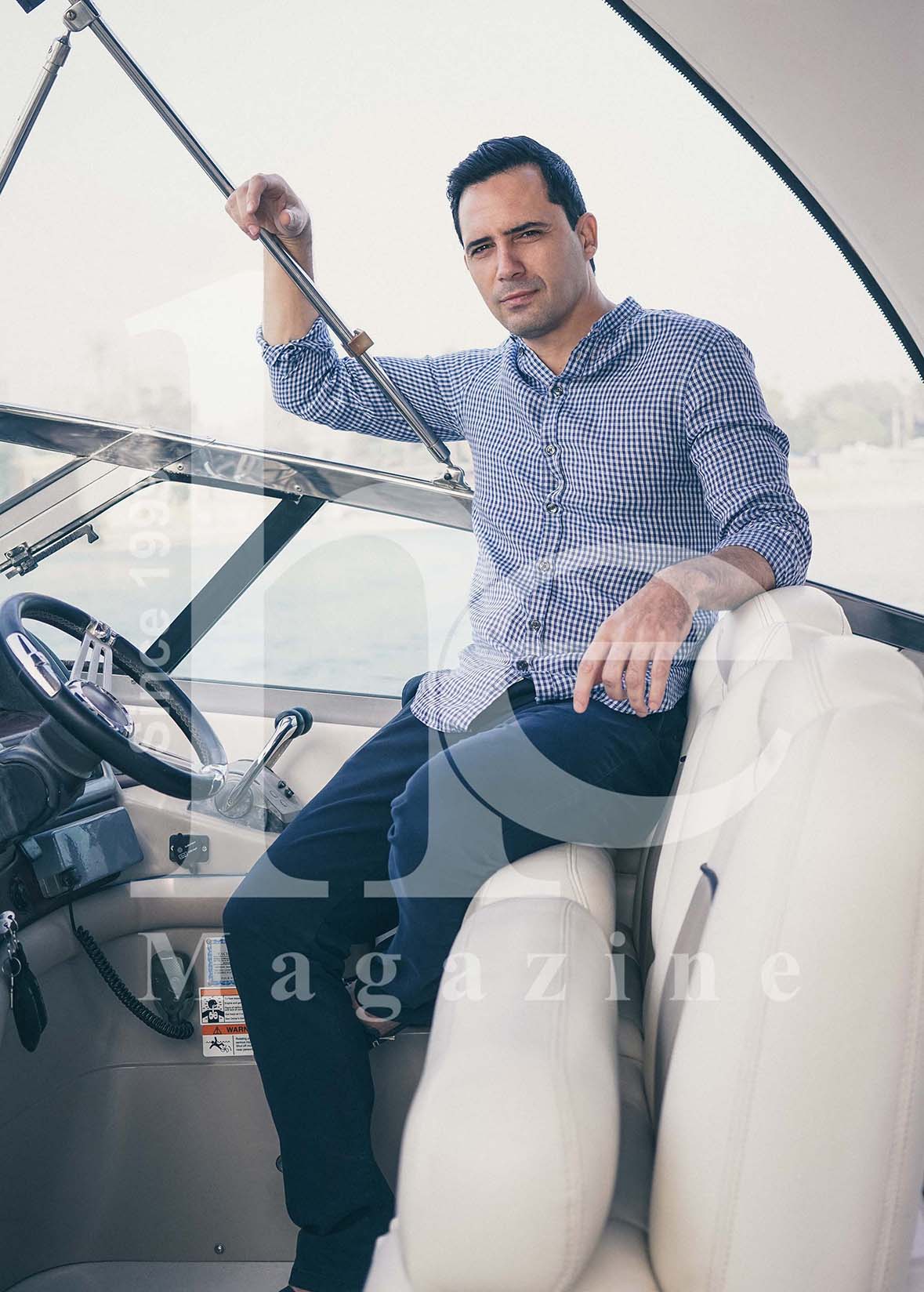 “To be able to have successful movies every year is a completely different story. It’s related to a different writing style that we lack. As Arabs, we need to do more mixed productions. We need to be closer to international producers and actors. We also need to learn how to work together with different cultures and how to put the best actors with the best producers to create the best motion pictures,” L’Abidine said.

“We also have to do a better job of understanding different cultures because then we can connect our movies with their culture,” he said.

“If you want a cappuccino and I bring you tea, you probably won’t drink it because you asked for a cappuccino. It’s the same concept in acting. We need to give our audience something that they ask for so they can relate it with their culture,” he said.

With L’Abidine’s unique history growing up in Tunisia, living in France for a while, and now living in England, I was curious to know what his thoughts were on the role of women in the Arab world.

“Every country has a different culture and traditions, and unfortunately we are still behind in the Arab world. The Middle East will never be fully developed unless everyone has the same rights, including men and women. You can never clap with one hand—you need both hands to clap. Men and women need to have the same rights to work together to create a better society,” he shared.

As we were speaking about women’s role in society, I was curious to hear his take on the rumor that Middle Eastern women are very hard to satisfy in a marriage. I was interested to see what he thought about relationships with Arab women in general since L’Abidine is happily married to his British wife Rachel, who is also an actress and a singer. I asked L’Abidine if he thinks it’s easier for a relationship to survive if the woman is not Arab even if the relationship has difficulties such as the spouse being an actor with a hectic life because of his or her travel and work schedule.

“I don’t like to generalize. I think it depends mostly on the couple and the couple being able to communicate with each other. Trust and support between the couple are also two very important factors that could determine if the relationship will succeed or not,” he said. 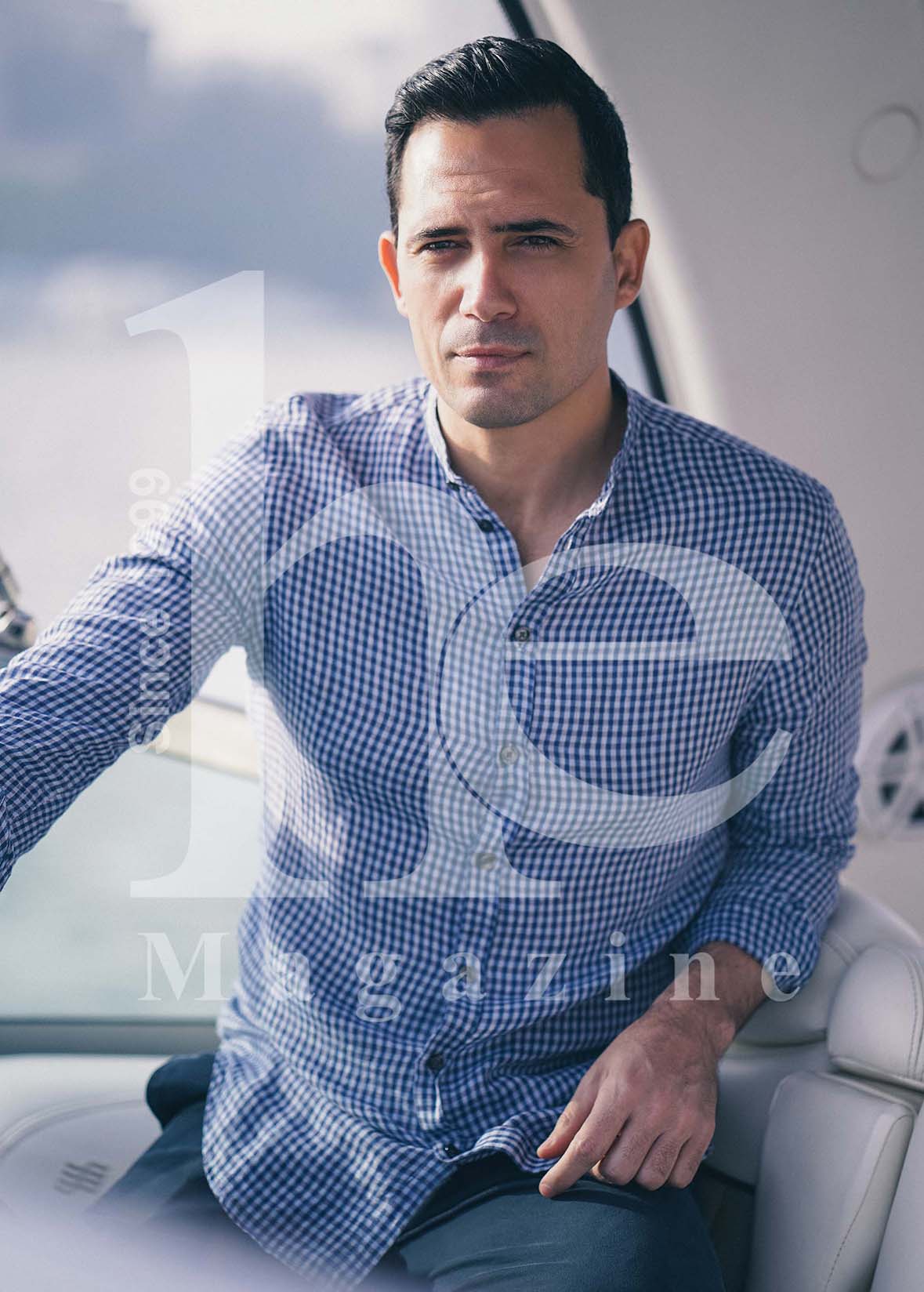 When L’Abidine has free time, he likes to spend it with his wife Rachel and his daughter Yasmine. Together they chill, watch movies, watch musicals, eat at restaurants, and play a lot of sports.

“I’m actually quite boring,” he said to me while laughing. “I don’t have any weird hobbies or obsessions. I just like to do all the regular stuff such as spending time with my family, watch movies at home and eat dinner at nice restaurants.”

L’Abidine starred in many international movies and series includingSex and the City,The Da Vinci Code, TheHunt Feast, andThe Transporter, airing on TNT and HBO Canada: two of the most watched television networks in the world. He also starred in The Children of Men, Hunted,Casualty,and A Hologram for the Kingstarring the award-winning actor Tom Hanks.

In the Arab world, L’Abidine starred as one of the main characters in one of Ramadan’s best series in 2016: Halawet el Donia. He also stared in the moviesHabet Caramel andAbou Shanab.

Since acting hasn’t taken its toll on him yet, L’Abidine was also a TV presenter for Ameer El Shu’raand on Dubai TV he has hosted the Arab version of the international game show The Cube.