Development in Egypt guides us as a lighthouse and to that we reveal our beautiful art. Take us back to the glorious old days of Art. When you remember those who developed their art; Mokhtar should be first in your thoughts.

By Mohamed Abdel Ghani Hassan, Poet, written on the occasion of unveiling the statue of "Egypt Renaissance" by the sculptor Mahmoud Mokhtar.

Mahmoud Mokhtar was one of the renaissance generation pioneers in Egypt. The renaissance generation is known for its leading role in directing modern Egypt towards new horizons. Mokhtar was born in El-Mahala Elkobra city in Gharbeia Governorate in 1891. He lived with his grandmother at his uncle’s house in Mansoura. As a child, he used to spend most of his time in rural Egyptian areas besides water canals making shapes out of mud, shaping scenes he saw around him. Out of that mud he made horses, camels, knights, farmers and other characters he imagined from stories he heard from his grandparents or ones he heard from the village story tellers like: Abo Zaid El Helali, Zeer Salem and Antar among others.

In 1902 Mokhtar came to Cairo and chose an old historic neighbourhoods to reside in, ones with narrow branched alleys and mosques, when put together, the image of the village complements an overall portrait of Egypt. Mokhtar continues his hobby and combined the life he used to have in the villages with his new one in Cairo. He drew old districts on paper while reading old books and watching the folklor story telling show known by the name of “the world’s box”. 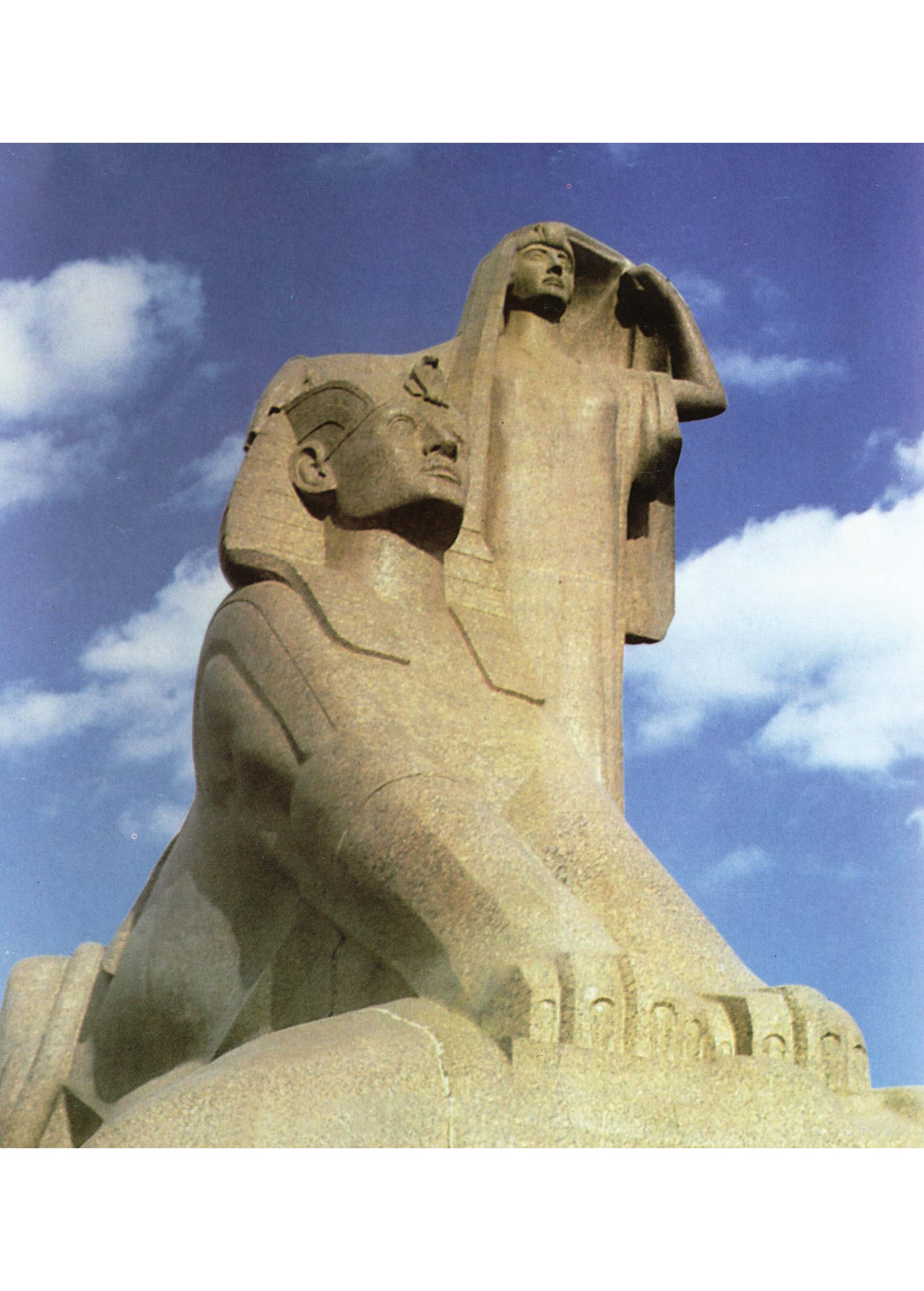 In 1908, Prince Yousef Ameer established the first school for fine arts, with teachers and artists from France and Italy and headquartered it in Darb El-Gmameez near to Mokhtar’s residence and that was when the goal he dreamed of finally had a chance to become a reality. The artist never expected that he would choose this path but he joined the first class when he was 17 and graduated in 1911 with his colleagues, Mohamed Hassan, Yousef Kamel and Ragheb Ayad who together later represented the first generation of fine artists in Egypt.

His talent was recognised by his foreign teachers and they allocated a special studio at the school for him to carve his own sculptures. Forming statues and shapes for villages and his neighbourhood mates, Mokhtar gained an excellent reputation among his colleagues and was known for being serious and giving prioity to his work. His professors discovered his ambition so helped him in developing it. Prince Yousef also helped him by sending him to Paris to continue his studies. As Michelangelo started his career with the assistance of Florentine Prince Lorenzo de 'Medici, Mokhtar started his with the assistance of the Egyptian Prince Yousef Kamal. Mokhtar took his first lessons in Arts in the school attached to the Prince’s palace. During his European mission in 1911 at the age of 20, with his love of Egypt, the charm of Paris did not influence him but it made him further believe in the greatness of his country. He started his studies in this new environment confidently and he was able to be a symbol for his country’s renaissance. He represented a noble image in which he renewed the rebellious patriotic feelings. This was reflected in the statue of "Egypt Renaissance" that represented a moral symbol connecting the past to the future and transmitting an image of hopes for a better future for new generations.

Mokhtar started taking steps towards universality in 1913 when he viewed the Aida statue in Paris and seven years later made a small model for his Egypt Renaissance statue. The great critics of France were overwhelmed and announced the birth of a new artist who added new dimensions for modern sculpture based on old Egyptian history. In 1930, two years following the completion of Egypt Renaissance, he presented 40 statues in Paris representing the contemporary Egyptian art.

Mokhtar was a student of the great French sculptor Laplane in Egypt. In Paris he studied under the supervision of Mercier, and never neglected his roots from which he developed like Pharaonic sculpture. Mokhtar was also influenced by local Egyptian folk art that was common in the district of Azbekeya and Mohamed Ali Street in Cairo. He created cartoon statues during his years of studying before leaving for Paris in 1911 like "Son of the Countryside", he also formed a number of small statues with a sarcastic local nature like; barber, beggar and singer among others.

Mokhtar wasn’t just a genius at sculpture, he was a thinker who felt his people’s concerns and who expressed his hopes and dreams through his sculptures. He used to pick certain materials to suit both shape and concept, for example; for the Al Mohagahstatue he used white marble for the body but the face was made from clay in order to reflect hardness with original Egyptian beauty. Artificial stone was used for Siroccothat reflected a storm. Most of the statues of peasant women were sculpted between 1924 and 1930, the most important and best known of which is the peasant woman holding a jar with one hand while bending to fill it with water and many other works in which you can feel its vitality which is how he proved that reality is able to show absolute artistic values. 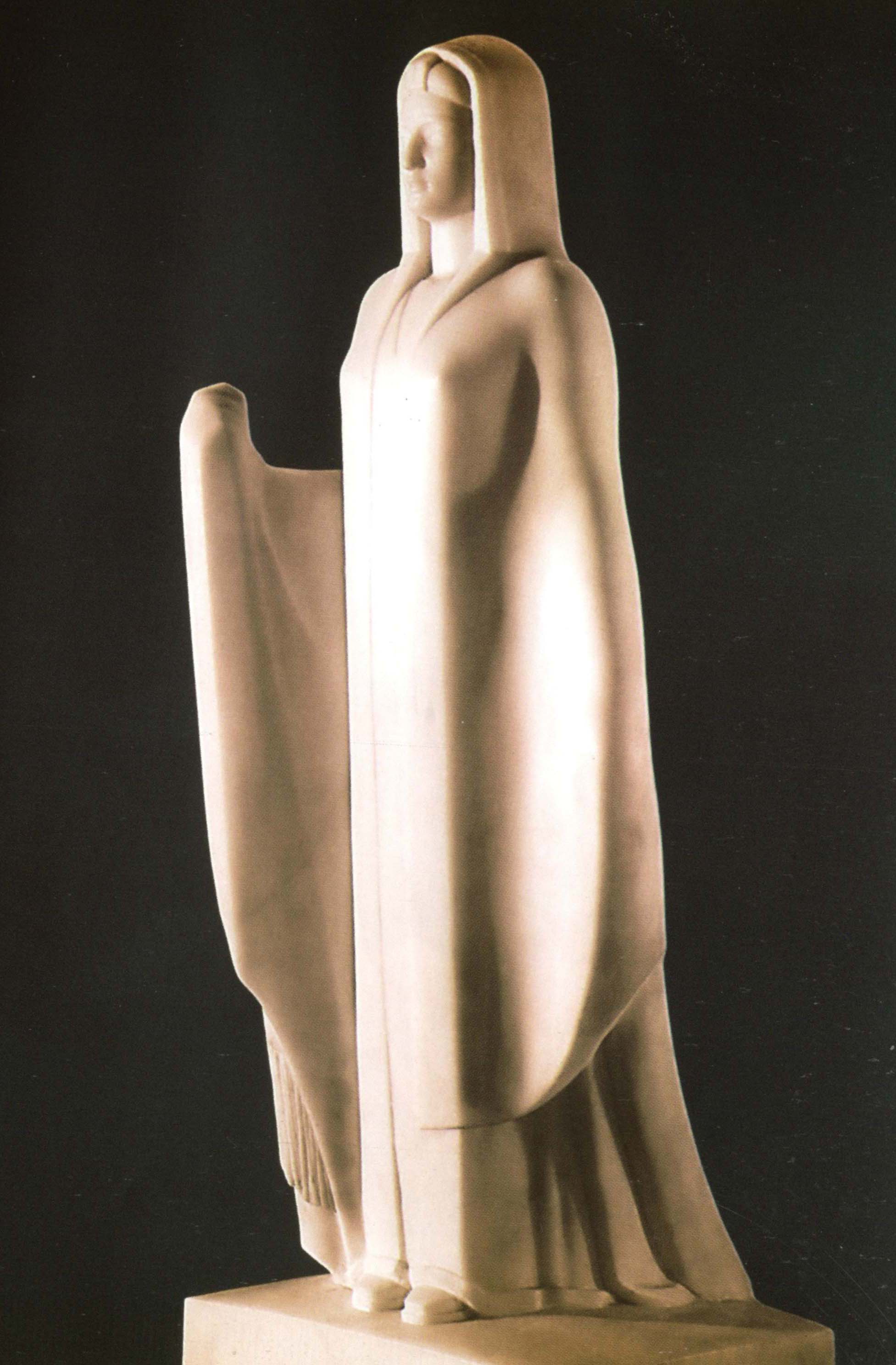 Mokhtar contributed to the establishment of the Higher Institute of Fine Arts and helped at sending artists abroad on scholarships and he participated at many international art shows by presenting his work that was met with great success. He also set up a special exhibition of his work in Paris.

He was the first who helped in introducing the Egyptian modern art school to the world and became known to the world’s famous critics. He was also the first Egyptian artist who won the gold medal at the annual exhibition of French artists which is held at the Grand Serail "Grand Balbah" for his model mini-statue of Egypt Renaissance pointing out that the first concept for the statue was a beautiful woman resembling Jean d’ Arc holding a sword as if she was warding off the British occupiers. When he looked carefully at the statue which had impressed his French teachers and concluded that it was a French statue so he recreated it setting a design for Egypt Renaissance in which a peasant woman is standing laying her right side against a promising past for a bright future represented by the Sphinx while holding a veil in her left hand and looking to an unlimited horizon.

Although he had a short artistic career as he died young, he succeeded in making a significant impact with his works that included urban statues and other works reflecting the lives of rural Egyptian villages which had affected him. These represented images of daily life that he excelled in creating and expressing in wonderful art works. He also carved statues of the Egyptian political leader Saad Zaghloul in Cairo and Alexandria between 1930 and 1933. His most famous works are; Isis, the Son of the Countryside, The Grief, the Wife of the Country Sheikh, the Fields Guardian, Woman Holding a Jar, Cheese Saleswoman, Nile River Bride, Love, On the River Shore, Back from the Market, About the Beloved, the Peasant, Keeper of Secrets and Sirocco.

Mokhtar injured his hand in 1932 a time when he was anticipating creating statues of Alexander the Great, the Egyptian leader Ahmed Oraby and Cleopatra but the injury did not give him the chance to fulfill his dreams. Mokhtar died in March 1934, and in 1952 the Mokhtar Museum was opened housing approximately 60 of his works as an annex to the Modern Art Museum. Then the Engineer Ramses Wissa Wassef, designed the Mokhtar Modern Art Museum currently at the Garden of Freedom in Gezira in front of the Opera House. The mortal remains of Mahmoud Mokhtar were transferred to his new tomb inside the museum, the museum that represents a lighthouse for pioneers of Fine Arts and especially sculpture, and a witness to an important historical and political period in Egypt.