“An architect without an identity is a miserable architect. Finding your own identity and sticking to it along the way will be challenging, but giving your designs a genuine persona is what will eventually distinguish your work…this is what makes me who I am,”said architect and interior designer, Ahmad Fayyad, founder and managing director of F&R Partnership, and winner of the International Property Award in 2017.

Fayyad specializes in minimal architecture. Since he was in college, he had unconsciously developed a passion for using simple design elements before even knowing or studying the characteristics of “minimalism”. With his talent and skills acquired, Fayyad succeeded in developing a unique identity in the booming world of architecture.

When passion and character intersect to start a successful career

Fayyad has graduated from the architecture department of MSA University in 2003; his class was the first to graduate from this department. He has always enjoyed creating abstract and simple designs.

“I enjoy working on subtle projects… the ones that aren’t too loaded and generate cozy vibes.”

Later, he understood that this approach was stemming from his lifestyle and personality.

“I didn’t know back then that the designs I create belong to the school of minimalism. I have simply found my thoughts flowing in this simple manner on the sketch until one of my teachers has raised it and taught me about minimalist architecture,” Fayyad explained.

“I think it is related to my upbringing, as I was raised by Sufi parents who taught me how to live and enjoy a simple life. So, this minimalist mindset has shaped my thoughts and personality, and has been reflected in my work as well.” 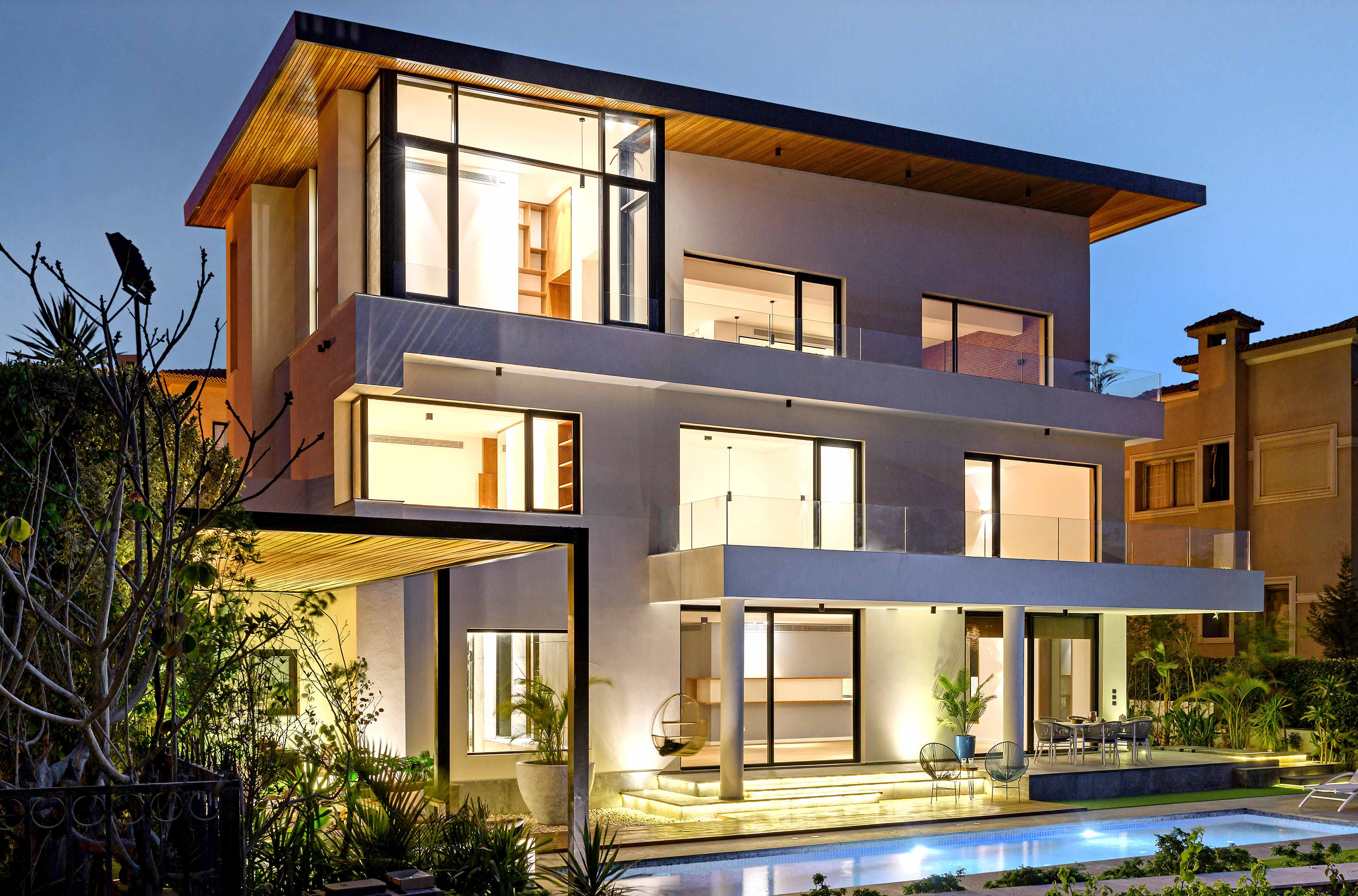 “I started my career during a period where there was no advancement in technology like what we witness today. So, there were very limited resources to get ideas and inspiration from. Architects did not even like to share any photos of their work. So, unlike the new generation, we were not privileged with the exposure they have today.”

But this was not the only challenge…

“Minimalism wasn’t very appealing or even known in the Egyptian design field,”Fayyad continued, “and at the same time, I knew that this was my specialty, and I wasn’t willing to seek any other form. So, I had no other option but to stick to what I believe in and let my work speak for itself.”

Indeed, Fayyad has built a name in the field and his work started getting featured in magazines, which gave him good exposure.

“There was no architect spirit at the time,”said Fayyad, “I wanted my work to have a certain spirit, a definite identity.”

It is more about the “concept”, not the “trend”

“I do not like the word ‘trend’. There are some things like suits that will always fit our desires and needs, no matter what ‘trend’ is occurring. Some things are classics… they are everlasting. Architecture is more of a concept; it is not something that should fit the latest trend.”

Later, Fayyad explained that the architect is like a maestro in control. He is the one who gathers the full scope of the interior and exterior, then creates a 3D model out of 2D.

Fayyad’s projects were recognized locally and internationally. One of the most remarkable ones and the closest to his heart is the GLC Paints Color Trends project, where Fayyad has participated with 4 other prominent designers to create distinct designs.

“The most inspiring elements in life are found in nature. When there is a fusion of these elements with man-made design, that is when great architecture happens. The minimal approach to the forms of my design was highlighted by all the elements of nature, be it water, plant, rock or sky.”

This project was a challenge as it was Fayyad’s first trial for a set design. It was also an expressional project that he could personally relate to.

“There is one photo where I was crouching on the ground in front of the design, no one told me to take this pose, but I felt like doing it. There was a strong connection between me and this design. It reflects my personality in a way.” 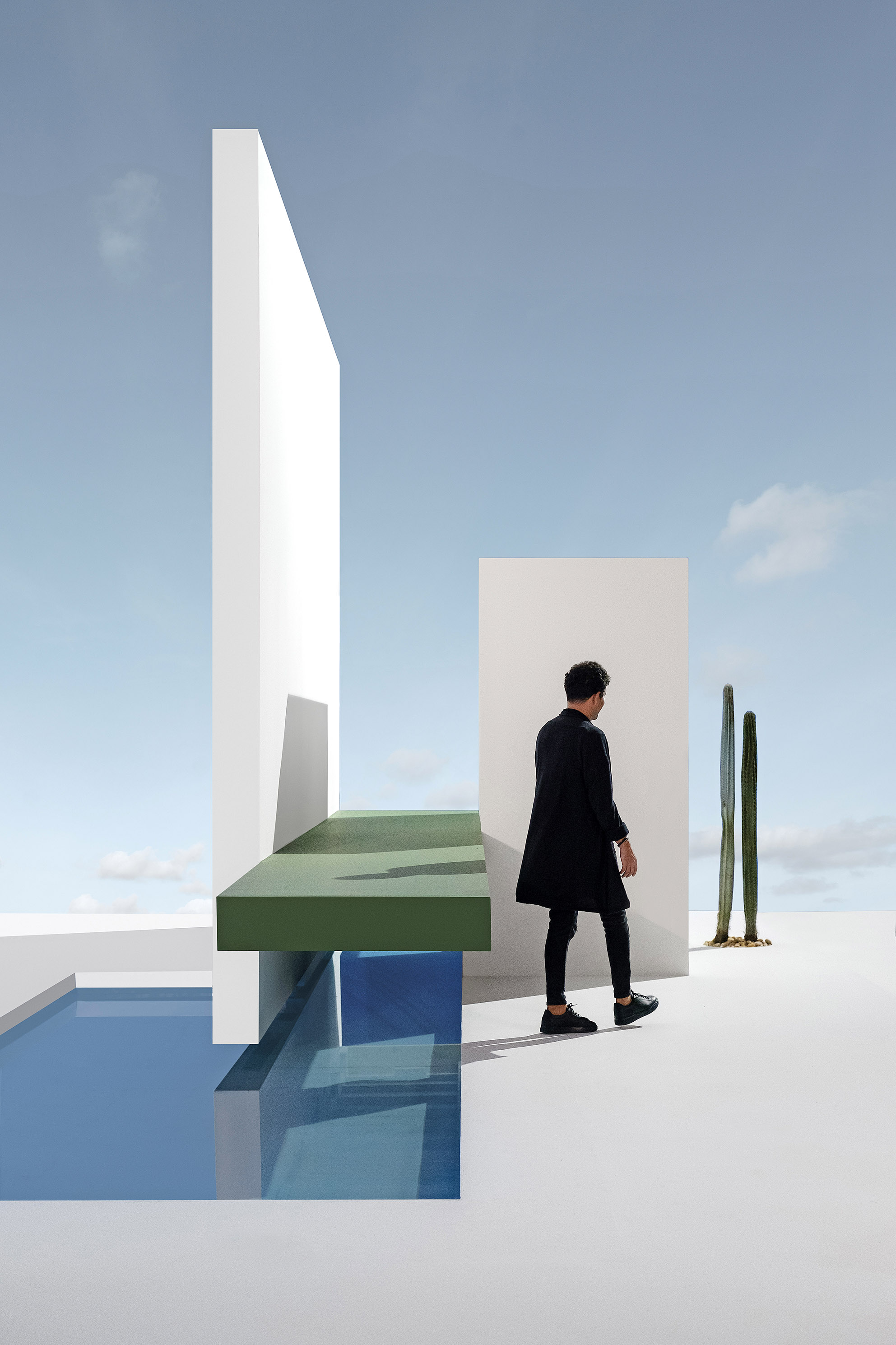 One of the most challenging projects that Fayyad has worked on is Creek Hotel in El Gouna. The exterior of this project was already designed, Fayyad had to only design its interior and make it match F&R Partnership’s spirit.

“We had to improvise and design an interior that doesn’t only reflect our identity but also harmonize with the exterior of the hotel.”

The inspiration behind it all

Mies van der Roheis one of Fayyad’s greatest figures of inspiration. He is one of the most influential architects of the 20th century, known for being the first leader of minimalist design.

Fayyad has been also inspired by Howard Roark, a fictional character from Fountainhead, a novel written by Ayn Rand. In the story, Roark is a brilliant young architect of the modern school, whose bold and innovative designs are rejected by large segments of society.

“Roark’s ambition and his success story gave me the push I needed during that phase to pursue what I believe in, minimalist architecture, and focus solely on it.”

A golden piece of advice to the new generation

Fayyad believes that every person—not just architects and designers—should follow their passion, listen to their voice, and not get influenced by what the majority are following.

“An architect without an identity is a miserable architect. Finding your own identity and sticking to it along the way will be challenging, but giving your designs a genuine persona is what will eventually distinguish your work.”