People grow out of a lot of things as they age. Their style changes, their worldview changes, even their social circles may change, but there is one thing men do not outgrow: toys. Over the years, toys may take on different forms, from the action figures and toy trucks of childhood to the cars and motorcycles of adolescence, but in the end, a toy is just a toy. Some toys though are truly beautiful and costly, and can only be played with by a few.

One toy that most men would enjoy having is a boat. Some men dream of a sailboat to take out on a lake for some relaxing sailing while others dream of cruising around the sea in a speedboat, and still others dream of owning a yacht and being able to eat, sleep, and socialize on the open sea. It is no surprise then that there are many famous people who own boats, and not only do they own boats, but they own some of the largest, most decadent boats in the world. In this list, we showcase ten boats owned by celebrities, world leaders, and businessmen. We will see yachts owned by Gulf royalty, European monarchs, and Hollywood celebrities. These vessels come in all shapes and sizes; some were created for their current owners while others have unique and interesting histories. Spanning the list, we have a number of super-yachts—some among the largest in the world. These boats are the ultimate big boy toy for every adult who dreams of one day having their own yacht to take out to sea.

I truly believe that you are never too old to play with toys, and you are certainly never too old to appreciate the beauty and the fun of big boy toys. Maybe you already have your own yacht, maybe you will use this list to develop your own dream yacht, or maybe you simply want to kick back and appreciate a number of beautiful boats, either way, the following boats are truly vessels worth admiring. 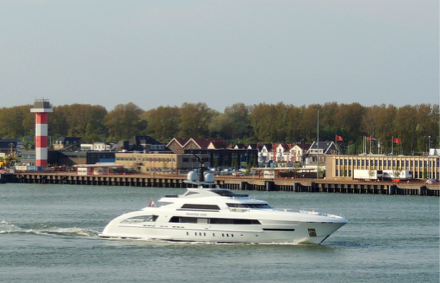 Music legends Beyoncé and Jay-Z have been photographed aboard the 65-meter Galactica Staryacht. This yacht, a rumored gift for Beyoncé’s 32ndbirthday, is one of the best and was given the title of the world’s largest fast displacement yacht at the time of its launch. The yacht can travel at 30 knots while burning 30% less fuel than a craft of the same size. The Galactica Starincludes a sundeck, a duplex beach club, and a touch-and-go helipad. The boat also features multiple suites, a pool, sauna, and an infinity-view Jacuzzi. At an estimated $70 million, this yacht is luxurious enough to suit any visitor, even music royalty. 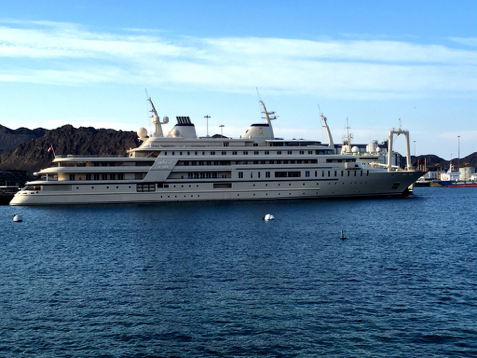 It is expected that the ruler of a seaside nation would have a fine taste in boats. That is why Sultan Qaboos of Oman can boast ownership of the magnificent Al Saidyacht. This super-yacht is currently the world’s highest displacement yacht, weighing in at 15,850 tons. Little is known about the interior of this $300 million super-yacht whose interior has never been photographed, but it is apparently home to a concert hall large enough to hold a 50-piece orchestra and 70 guests. This 155-meter yacht is the fifth longest on the sea and has been sailing the seas for just over ten years since its launch in 2007. 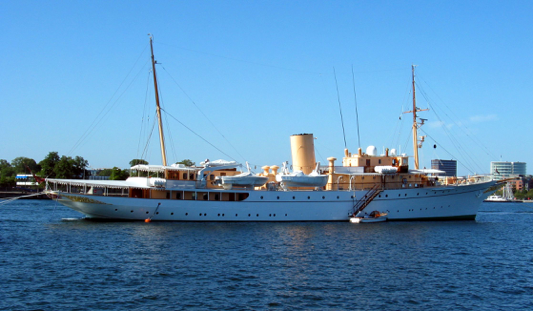 Her Danish Majesty's Yacht Dannenberg currently serves as the royal yacht and private residence of Queen Margrethe II of Denmark. Commissioned in 1932 by Queen Alexandrine of Copenhagen, this yacht has sailed far and wide, visiting most of the ports of Denmark, Greenland, and the Faroe Islands and has traveled throughout the Mediterranean and Caribbean Seas. One of the most historical yachts on this list, the Dannebrog, named after the Danish flag,proudly serves the royal family of Denmark and is furnished with items from the previous royal vessel of the 19thcentury. The yacht stands at 78-meters long and doubles as both the royal family’s private residence and a hospital ship to be used in times of conflict and war. 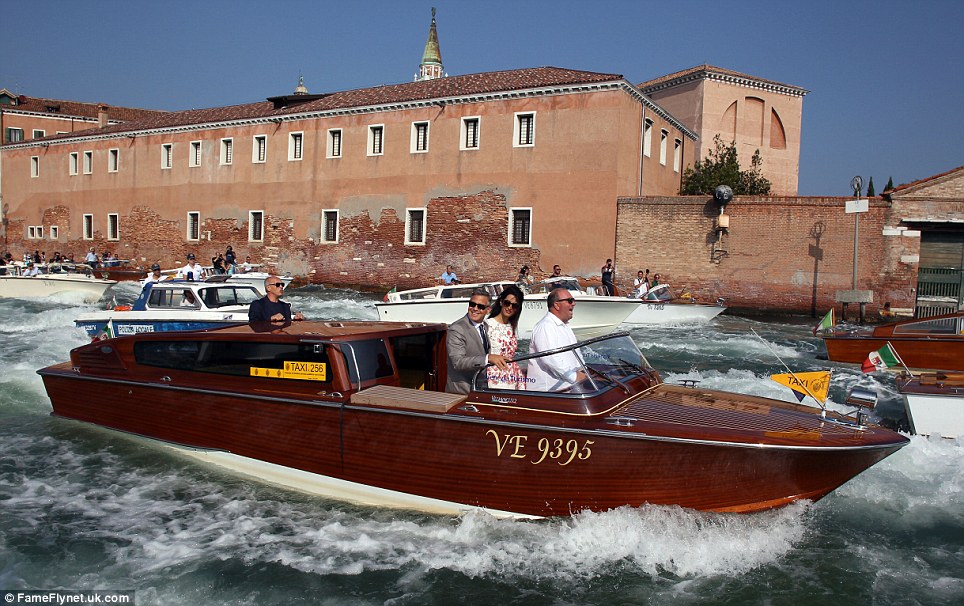 Though not the largest boat on this list, George Clooney’s Riva speedboat may just be the sleekest and most chic. Riva boats gained popularity throughout the 50s and 60s as they became a symbol of luxury and class. Throughout the years, these oats have been own by world leaders and Hollywood legends such as Sean Connery, King Hussein of Jordan, and Elizabeth Taylor. Perhaps most famous now is George Clooney’s VE 9395Riva yacht. Clooney along with wife Amal Clooney can often be seen cruising around on their speedboat on Lake Como in northern Italy. These boats may not have the space of the bigger yachts, but they are made with the finest precision and care, earning George Clooney’s Riva a prized spot on this list. 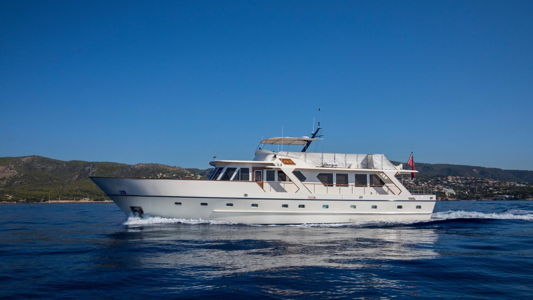 Once the hottest yacht, the Stalcawas delivered in 1971 to Prince Rainier of Monaco and his wife Princess Grace Kelly, famous Hollywood actress. This yacht sleeps eight guests in four cabins, plus a master suite and a VIP suite. The yacht, named after the couple’s children, once served one of the most famous royal couples and their friends as it cruised through the Mediterranean from its home in the small nation of Monaco. The yacht has been modernized and still contains the open plan saloon/dining room with a relaxation area and formal dining room. This 24-meter yacht is currently estimated to cost over $1 million. 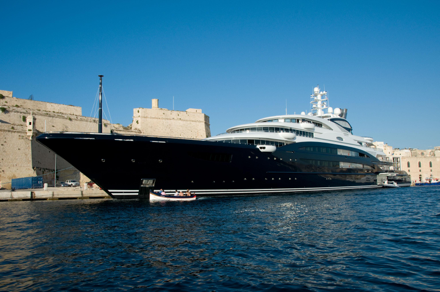 The Sereneis one of the younger boats on this list, completed in 2011. At delivery, it was one of the 10 largest yachts in the world with an overall length of 133.9 meters. This yacht was used by many famous people including Russian tycoon Yuri Shefler and American business man Bill Gates. Since 2015, Serenehas been owned by Prince Mohammed bin Salman of Saudi Arabia, who reportedly paid upwards of $600 million for the vessel. Throughout the year, the yacht can be found sailing throughout the Red Sea not far from popular Egyptian resort towns like Sharm El-Sheikh. 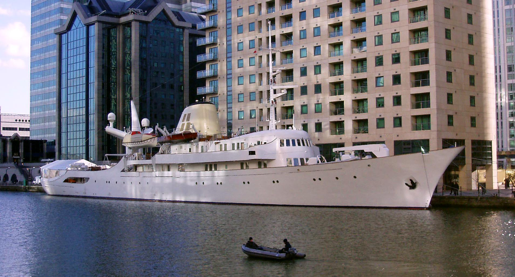 Though most yachts are commissioned for the luxury of their owners, others have unique histories full of action. The Christina O, named after the daughter of billionaire owner Aristotle Onassis, did not begin its life as a luxury yacht, but as a Canadian anti-submarine River-class frigate. Upon purchasing the yacht for a mere $34,000, Aristotle Onassis turned it into one of the most famous yachts of the 20thcentury. Christina O hosted many famous people throughout the years including Onassis’ wife Jaqueline Kennedy Onassis (widow of US President John F. Kennedy), Winston Churchill, Grace Kelly, Frank Sinatra, and Elizabeth Taylor. This yacht, just shy of 100 meters, has many residential areas as well as an outdoor pool with a minotaur-themed mosaic floor that rises at the push of a button to become a dance floor, a helipad, and a bar that is home to bar stools with their original upholstery crafted from a very soft leather made from the foreskins of whales. After Onassis’ death, the boat was gifted and renamed Argoas the Greek Presidential yacht. Today the boat is available for purchase with asking prices around $30 million—much more than the $34,000 paid for it. 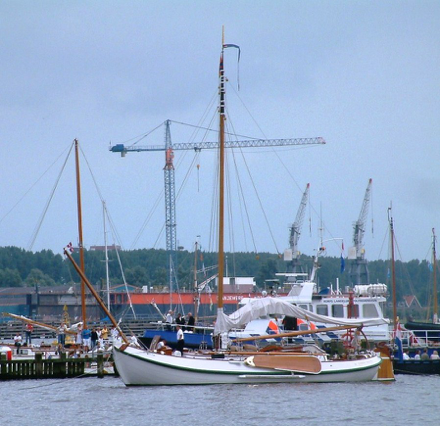 Another royal vessel, De Groene Draeck was gifted to Beatrix of the Netherlands in 1957. This small, 15-meter boat is regularly used by the royal family for sailing. Unlike other large ships on this list which can be used as residences and guest houses, De Groene Draeckis more of a pleasure boat, becoming a Dutch charm. The boat can often be found docked in the Dutch municipality of Muiden in the northern Netherlands. 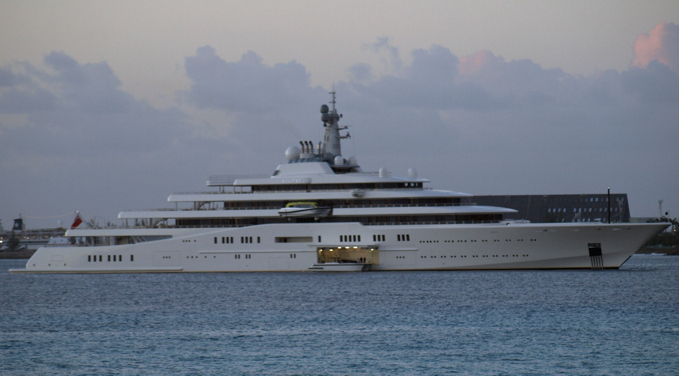 Few boats truly earn the title of super-yacht, and there is no denying that Eclipseis indeed a super-yacht. Owned by Russian businessman Roman Abromovich, Eclipse is the world’s second longest private yacht, spanning 162.5 meters. This massive yacht features a number of luxury amenities including two helicopter pads, 24 guest cabins, two swimming pools, hot tubs, and a disco hall. The boat is also equipped with three launch boats and a mini-submarine. Estimated at over $400 million, this yacht is among the most bold and luxurious on the sea. Eclipse can most often be seen in the Caribbean Sea, where it transports private guests from to and from a number of Caribbean islands. 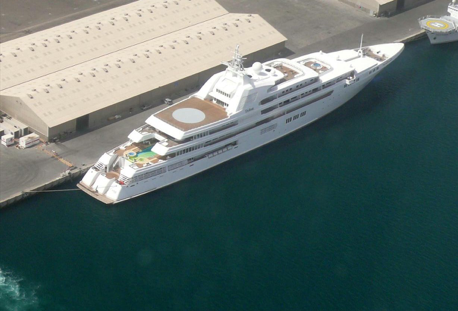 The appropriately named Dubai yacht is owned by Sheikh Mohammed bin Rashid Al Maktoum, Ruler of Dubai and Vice President and Prime Minister of the United Arab Emirates. Another massive boat, Dubai spans an incredible 162 meters, making it the third largest privately-owned yacht in the world, just being Eclipse above. Costing over $400 million, this yacht serves as a luxurious getaway for the Emirati ruler and can hold more than 100 guests. Dubai’s interior is known for its handmade mosaics and a spectacular staircase featuring glass steps, which change color. Dubai has seven decks as well as a striking mosaic swimming pool and several Jacuzzis—not to mention a helipad.